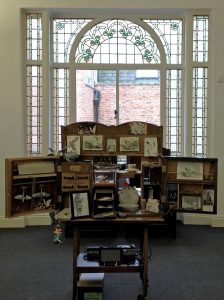 The Cabinet of Curiosities in Church

As well as work inspired by Sontag, from 2015-2017 I’ve worked with the Re:Collect artists’ collective touring in the West Midlands with the Cabinet of Curiosities – I’ve made text and sound and video based installations in drawers and boxes within a portable wooden cabinet with many hidden spaces. We’ve exhibited in Museums and Castles and churches and used the work to commemorate WWI and in intergenerational participatory workshops (see list here https://recollectartists.wordpress.com/exhibitions/ )

Dusting, a video I made for the multi-million pound rebuild of Shrewsbury Museum and Art Gallery, was part of a series made for  the launch year in 2014/5,  inspired by Susan Sontag’s Unguided Tour essay, about the way we feel and look at objects from the past. Here’s a taster, from a group show with artists’ collective  Re:Collect in Shrewsbury January 2013 ‘Dusting’ Sue Challis 2012 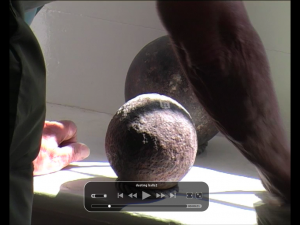 This entry was posted in Artwork & exhibitions and tagged cabinet of curiosities, museums, participatory arts, video artist. Bookmark the permalink.

This site uses Akismet to reduce spam. Learn how your comment data is processed.