But You Promised was a video made and shown at the National Dublin School of Art and subsequently in a solo show at Oriel Davies in Powys in 2008. The film (showing rubbish in the Grand Canal Dublin transformed by bright sunlight into golden treasure), about the death of a parent, was installed in the bottom of an oil drum, in which echoed a haunting refrain from Shakespeare’s The Tempest, ‘Full fathom five they father lies’. The installation was later shown at the Chocolate factory, London and The Swept and Garnished group show in Shrewsbury, alongside several other films made at the time. 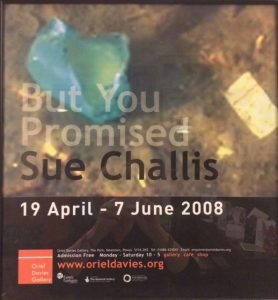 But You Promised poster with video still

This entry was posted in Artwork & exhibitions. Bookmark the permalink.

This site uses Akismet to reduce spam. Learn how your comment data is processed.