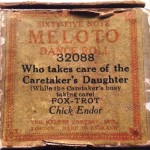 For some time I have been thinking about the enormous effort we make here in the West to suppress the knowledge that our safety and happiness depends on inequality, on other people’s exploitation. We have to do this  in order to live our daily lives. We must ignore information about how our clothes and phones and other goods are made in order to feel  good about ourselves – and because we do not know how to make things right, the problems seem insurmountable. I began making artwork about how we do this and the impact it has on us and the rest of the world a couple of years ago.

With a commission from Shrewsbury Museum and Art Gallery for a WWI exhibition in 2015, I began to think about the role music played in war, to encourage patriotism, consolidate a sense of them and us, raise spirits: “Music during World War I was often used to inspire passion and voluntary compliance in the listeners and, occasionally, shame in those who didn’t support the war”[1]. 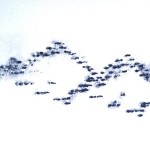 I came across a box of WWI era pianola rolls in a second hand shop and bought an old pianola – a major medium of popular music in the period – ‘Pack up your troubles in your old kitbag’ was the number one hit of the war. Pianolas were an important source of popular and classical music at the time and many well-known musicians (classical and popular) recorded for them: “By 1903 the Aeolian Company had more than 9,000 roll titles in their catalogue, adding 200 titles per month.” Pianolas or piano players are self-playing pianos which use music recorded onto perforated paper rolls to trigger many tiny bellows as the instrument is foot-pumped like an organ.They became popular along with the rise of mass-produced pianos, introduced around 1900 and produced in large numbers until the 1930s. 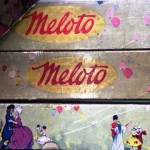 “While the player piano matured in America, a young inventor in Germany, Edwin Welte, was working on a player which controlled all the aspects of the performance automatically, so that his machine would play back a recorded performance exactly as if the original pianist was sitting at the piano keyboard. This device, the Welte-Mignon, was launched in 1904. From the early days, manufacturers sought to create mechanisms which would pick out the melody of a musical composition over the background of the rest of the music in the same manner as a live pianist”[2]. The production for these types of pianos peaked between 1904 and the 1930s, Sales peaked in 1924, then declined as the improvement in phonograph recordings due to electrical recording methods developed in the mid-1920s. 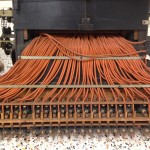 The perished pipes had to be replaced one by one 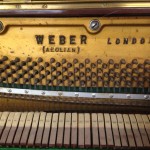 The pianola I bought is a Weber – a good make – powered by foot pumps. But it needed extensive repairs. I was lucky to find Birmingham-based pianola restorer Andri  Maimaridou (musiccrafts) – Englands only female pianola restorer. The tracker bar, a pneumatic reading device over which the paper pianola roll is transported, has a row of equally spaced holes; one for each note. A music roll perforation passing over the tracker bar caused a valve to open, which in turn triggered a pneumatic motor. The latter operates a felt covered wooden finger, pressing the corresponding note on the piano keyboard. 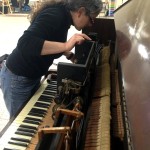 Andri spent an intense fortnight carefully replacing hundreds of perished rubber tubes and checking the tiny bellows which power the hammers. The day of re-installing the complex innards was tense – we didn’t know if mending one set of pipes would reveal or blow holes in the rest!

For the Shrewsbury re:collect exhibition in June 2015, Truth: the first casualty of war’, I made  drawings based on the rolls alongside recordings. My aim is to associate the (considerable) effort made to pump the pianola with the music which drowns out our doubts and obliterates more uncomfortable sounds and knowledge. Currently I am collaborating with a young composer, Rufus Dean, to make sound and visual pieces. I’d like to make an interactive piece where people can drown uncomfortable sounds by pumping the pianola harder… 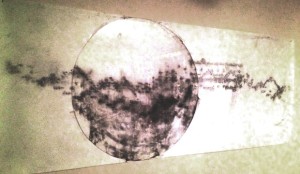 ‘Pack up your troubles’ was written by Felix Powell and George Henry Powell Piano Roll (2’31).

[1]Music as propaganda: a special parlor songs guest essay by K. A.  Wellshttp://parlorsongs.com/issues/2004-4/thismonth/feature.php  [2] the history of player pianio http://www.playerpianogroup.org.uk/articles/the-history-of-player-piano/26